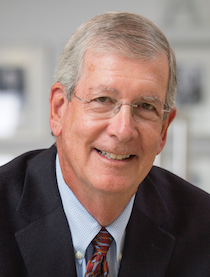 Allen S. Lichter, MD, is a Senior Partner with TRG Healthcare. Prior to joining TRG he was Chief Executive Officer (CEO) of the American Society of Clinical Oncology (ASCO), a medical professional organization representing over 40,000 physicians and health professionals in oncology. He served from 2006-2016

Dr. Lichter’s research at the NCI helped advance the use of lumpectomy plus radiation as an alternative to mastectomy in the local management of breast cancer. His work at Michigan established the clinical utility of three-dimensional treatment planning and conformal dose delivery. He has been awarded Gold Medals from the American Society for Radiology and Oncology (ASTRO) and the Radiological Society of North America (RSNA). In 2002 he was elected to membership in the National Academy of Medicine (NAM). He is a past-President of ASCO (1998-1999).

Dr. Lichter earned a bachelor’s degree (1968) and medical degree (1972) from the University of Michigan. He trained in radiation oncology at University of California, San Francisco, before joining the faculty at Johns Hopkins University, and later the National Cancer Institute